The Sahara Desert is the world’s largest desert. Only a small part of the Sahara is fertile and it is here that corn, dates and other fruits grow. These parts are fed by underground rivers and oases.

The Sahara desert stretches across much of North Africa covering over 9,000,000 square kilometers (roughly the size of the United States).

the Sahara covers some 30% of the entire African continent. It is the hottest place in the world with summer temperatures that often exceeds 57 degrees Celsius. It has an annual rainfall of 0 – 25 millimeters and is very windy with windstorms sweeping the sand up to heights of 1000 meters and moving the sand dunes constantly.

Sahara, (from Arabic ṣaḥrāʾ, “desert”) largest desert in the world. filling nearly all of northern Africa, it measures approximately 3,000 miles (4,800 km) from east to west and between 800 and 1,200 miles from north to south and has a total area of some 3,320,000 square miles (8,600,000 square km); the actual area varies as the desert expands and contracts over time.

Looking back on my recent trip to Morocco, there’s one experience that stands out from all the rest: a night in the Sahara desert. We stayed up late shivering in the cold trying to capture the stars, milky way, and never-ending sky. We rode camels into the dunes to watch the sunset. We woke up early and made our way back into the dunes in the dark to catch the sunrise over Algeria and paint the sand a glowing orange. We sandboarded, rode quad bikes, had tea with the cutest puppy, enjoyed delicious meals, joined in traditional Berber music, and cozied up around the fire.

All I can say is that our one night in the Sahara was truly an unforgettably epic adventure and perhaps my favorite memory from 2016. There truly is something inexplicably magical about the desert. I've been trying to write this intro for a while, but couldn't seem to find the right words. I'm hoping the phrase "A pictures is worth a thousand words." pulls through for me and you'll be able to relive my experience through my photographs. But really, you'll just have to go and see it for yourself. 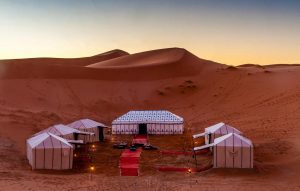 The History of Morocco

Morocco is a great example of a peaceful country filled with multi-etnhic cultures. This country lies in North Africa is now home to thirty four million of population. Casablanca might be the largest city in Morocco but the capital city of the country lies in Rabat. The Islamic culture you see here today is not originated from their ancestors, the Berbers. It was the Arabs who introduced Islam in the 7th cnetury as they made their invasion to this country.

In the later stage of the second millennium, the Berbers was known as the earliest settlers in this region. They had a crucial role in preventing the Roman occupation. Despite the fact that the Roman occupied most of the exterior of the region, the Berbers managed to keep the High Atlas Mountains and Rif Mountains untouched. The Moroccan Berbers had done the same thing as the Vandals and Byzantine forces came to invade the region. Later in the early 1900, the French colonized this country. Their long occupation can be seen on the biggest cities in Morocco, Rabat and Casablanca, which were designed in French style.

The diversity of the culture in this country was shaped by the influences of various regimes. In the end, you can now see a truly beautiful country that attracts millions of international tourists every year.

7 Days Biking and hiking Trip In Djebel Of Siroua morocco

6 days hike between the dunes of Chegaga

6 days hike between the dunes of Chegaga In addition, in the great south of Morocco, there are two l More info
Book now

discover the moroccan desert and atlas mountains (7 days) During this 7 days trip to the desert, you More info
Book now

The roses valley and the southern morocco

The roses valley and the southern morocco. The Rose valley is well-known for its innumerable Kasbahs More info
Book now

Unfortunately there are no Day Trip offers at this location at the moment.